DigiRostrum was the leading industry tool for producing high quality rostrum work (Ken Burns effect) for broadcast. DigiRostrum 3.0 hds improved graphics, previews and rendering and could be used on Mac as well as PC. DigiRostrum provides a set of tools that are versatile and powerful enough to meet the needs of demanding high-end users in television post-production. Our users include many leading programme makers and post houses including: The BBC, Ken Morse, Chris King, Bill Tondreau, Envy, Resolution, The Farm, Fusion, Tiger Aspect and Fulcrum TV. 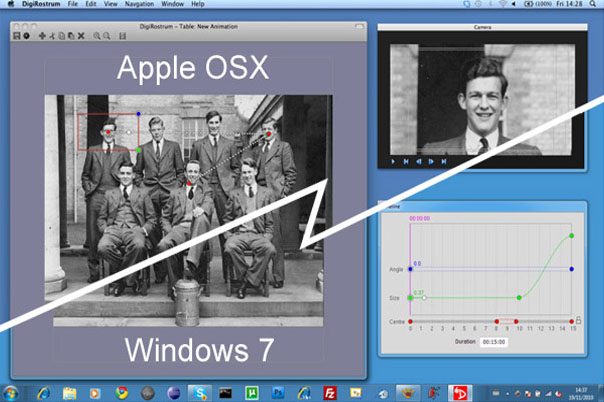 "DigiRostrum is simply the best rostrum software available. Nothing else offers the same high level of control, vital for professional rostrum work."

"Congratulations on your superb DigiRostrum software. It's truly a delight to use. The ease of use and quality of motion offered by your software is far superior to any competing product."

"We were commissioned to produce a high-volume, low-cost series featuring lots of expensive world class photography for BBC2. Quite a challenge. We found that DigiRostrum was an efficient and flexible way of incorporating the stills into the series. Even better, we made dramatic savings on rostrum costs that helped us put more photographs on screen. DigiRostrum was a revelation. It transformed the way we work."

Version 3 of DigiRostrum has been rewritten from the ground up using Python, C++, wxWidgets and OpenGL to create a state of the art, fully cross-platform desktop application.