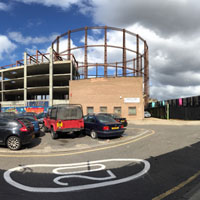 Digital Toolmaking is the process of creating software tools that open up new creative possibilities, software that asks questions of its users and creates new affordances rather than solving single process issues. This is achieved by having a clear understanding of users needs, and often complex problem domains, having a broad palette of technologies to draw on, and then designing and realising software that gives users better insights and greater control.

Two recent examples of such Digital Tools that we have created are Printcraft and Winnow.

Printcraft allows children to use the familiar video game Minecraft as CAD tool for 3D printing, it is widely used in teaching design and technology with young children.

Winnow is an open source interchange format created for the innovative furniture company Opendesk to support their distributed manufacturing of customisable and parameterised furniture designs.

Paul is a highly experienced computer programmer and systems architect, with a strong knowledge of the technologies of real-time graphics and television production. He started coding in STOS Basic on an Atari ST thirty years ago, was a film editor for many years, worked as a research technologist at BBC R&D, has programmed in many languages and once turned down a job at Eidos before they wrote Tomb Raider. His recent work includes mobile tools for TV production, agricultural robotics and consultancy at Arup on the design of IoT systems for the workplace. Along the way he has acquired strong project and team management skills, a wealth of technical knowledge, and a deep understanding of the social and commercial role technology can play.

As well as projects commissioned by clients, Paul develops his own software most recently Edit Board, a platform and mobile app for collaborative film and television production.

If you would like to talk to Paul about work you can reach him at paul@glowinthedark.co.uk